After meeting with a group of bloggers including Avitable, Father Muskrat, Dave and Coal Miner's Grandaughter in Atlanta last weekend, I realized I should at least "attempt" to get back to writing a personal blog with the hopes of staying on the Blogography blogroll. No, I'm not a dead beat - I've been focused on my technical blog where I'm a god. Okay, not really, but it's well known in the industry whereas this blog is known by about 3 people.

Upon digging around for something to write about, I came across my blog post from August of 2008 where I reveal my addiction to video games.  Here I am 3 years later and guess what - I'm still hooked.  I'd love to say that the PS3 is a stress reliever, and that it prevents me from drinking and getting angry all the time, but it doesn't.  In fact, it probably gets me MORE stressed out.  I could stop playing, but what would I do with all my free time? Go outside?  Play with my kids?  Nah, I'd watch TV, so at least by playing games, I'm able to exercise the left side (or is it the right side) of my brain.

We all have addictions: some people play golf, others may smoke. I know my addiction - what's yours?
Posted by Kevin at 5:03 PM |

I'll be the first to admit I'm not really a people person.  I don't hate people (all the time) I just don't find myself to be chatty with strangers, so I dread the typical banter of the hair stylist.  Today I thought I was off the hook when my Great Clips stylist started off saying, "I'm not going to talk much because I'm tired."  However then she proceeded to tell me WHY she was tired.  In the 10 minutes it took to cut my hair, I found out the following:
I don't really mind the banter, I just wonder how people do it.  Do people, like these hair stylists, really think we care, or am I just a people hater?  I suppose in the lines of profession where you service people, talking helps to pass the time.  Don't know.  Perhaps it's a skill I'll develop one day.  But I doubt it.
Posted by Kevin at 9:27 AM | 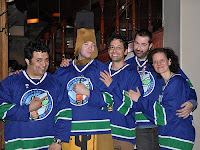 This past week I attended my first TequilaCon and I was amazed at the amount of people who attended.  I'm not into the blog crowd as much as many of the attendees were, so I didn't know most of the people, but it was pretty cool to see so many different bloggers.  I was also amazed at the work the TequilaCon crew put into the event. There was a lot of cool swag and it was apparent they put a lot of effort into the event.

I also want to thanks to Mr. and Mrs. Down With Pants for ordering Tequila shots for everyone!  Seen in the picture on the right, it seems like Brandon could pound down some Tequila.  (Now if we can only get Brandon to beat Copasetic Beth in Words with Friends.)  Also thanks to Brandon and Jen for the save... 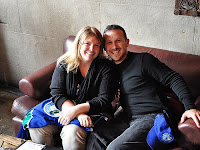 There was some discussion / debate on who traveled the furthest to get to TequilaCon.  While I would love to claim that title, I have to admit I was already in Vancouver for business.  So the winner would have to be my beautiful blushing bride, Beth, who flew in to Vancouver the Thursday prior.  I'm lucky she was able to actually come into the country since she was stopped at Customs and questioned about why she was in Vancouver.  I'll leave you to read all about that on Copasetic Beth's blog.

According to Google, she would have traveled 2,836 miles by car, but by plane it looks like roughly 2,249 miles is the distance travelled.  Of course, since she flew to Salt Lake City, Utah then to Vancouver may help confirm her winning distance.
Overall, the trip to Vancouver was great, we met some really nice people.  A special shout out to Sizzle, Brandon and his wife, Laura, Dave, Vahid, Jenny, and Dustin for going out of their way and making me feel welcome.
Posted by Kevin at 9:41 PM |

Time for a Change

For that one reader I have, I've decided to change up the look of my blog, so if you read this in a feeder, take a minute to visit the blog site itself.  It's been several months since I've touched this personal blog, but it's only because I've got nothing to blog about that anyone would really care to read.  I have, however, enjoyed starting up another blog that is more "business related" (BladesMadeSimple.com).  It's been fun writing that blog because it's about a topic I'm sincerely interested in and I've gotten over 5,000 page views since I started it in October on Wordpress.com (http://kevinbladeguy.wordpress.com/).

My time has also been devoted to Twitter (www.twitter.com/houstonsproblem).  It amazes me how watching people's comments can be so transfixing.  If I only had a way of watching Twitter feeds on my 52" HDTV.  Maybe that's coming...
Posted by Kevin at 12:38 PM |

Beth and I got to spend 5 days in San Francisco. We absolutely love the city because of the vast variety of things to do. Although the city is only 7 miles by 7 miles, there is SO much to do. When we came two years ago, we did the tourist things like ride a cable car, visit Alcatraz and visit Fisherman's Wharf, but we still barely scratched the surface.
Cupcakes!
One of the highlights of the trip was finding a store, called Kara's Cupcakes that sells only 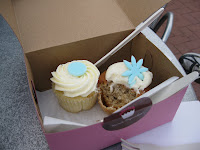 cupcakes! Beth absolutely loves cupcakes, so we had to check it out. It was like walking into a donut shop - there were so many varieties to choose from. We ponied up $9.75 to try the Vanilla Chocolate, Banana and Lemony Lemon. While they were cute and packaged in a pretty little pink box, they were just "ok" - a little plain, not worth the $3.25 ea. Beth's cupcakes are MUCH better, so perhaps one day we'll open up our own cupcake shop.
The Pacific Ocean
Last time we came, Beth journeyed over to the north side of San Fran to view the Pacific Ocean, 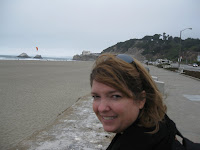 so this time, I wanted to go. 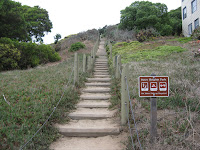 We hopped on the #38 bus and rode up to Ocean Beach and arrived at the biggest, cleanest beach I've ever seen. However, it was 5:30 p.m. and it was San Francisco, and it was COLD. I figure it was about 58 degrees, and Beth and I were wearing shorts. We couldn't complain, because it was the Pacific Ocean. Since we live on the east side of the continent, getting to see these waters are a rare treat. A little secret though - it looks the same as the Atlantic. Once we finished freezing our ass off, we determined hike up to the top of the cliff, 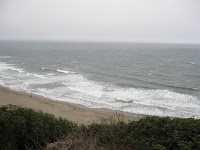 where the park was. We had already walked about 3 miles this day, so the site of a straight up hike didn't sit well, but we did it - and it was well worth it. From the top of the cliff, there was an awesome site. I definitely recommend this to anyone visiting.
Homeless
Throughout our trip in San Francisco, we ran into many people who were homeless. I know that

every city has some homeless people, but San Francisco seems to have quite an abundant number. Seeing these individuals truely make me appreciate the things I have in life. I may complain about my job, but at least I have one. I may complain about my income, but at least I can eat, and have shelter over my head. I may complain about my children and bicker with my wife, but at least I have a family to live and love. I really am blessed.
On every trip that Beth and I go to, we always buy snacks and drinks. This trip was no different. I was also in San Francisco for a conference, so I managed to collect a large number of t-shirts. We also also connected a nice supply of shampoos, mouthwash and toothpaste from the Hilton we stayed at, so at the end of our stay, we decided to collect all of the snacks we didn't eat, the toiletries we didn't need and shirts we wouldn't wear, and we put them in a bag to be given to a couple of homeless men. I know that these items were not going to change their lives, but my hope was that it would give them hope. I'm not blogging this for any praise or recognition, but in the hopes that others will consider doing the same thing the next time they visit a city. The little things can make a difference.
My business conference will be back in San Francisco in 2010. Will Beth and I attend - who knows? But if we do, I'm sure we will find more things to do.

Time to update. Sorry to my two followers for the nearly 30 day lapse.

Today I gave blood to the American Red Cross. This is something I've doing since college between 5 - 6 times a year. I think it is an easy way for me to do something for someone else. I am very fortunate in that I have really good blood. I'm A+, so it's not a rare type or anything, but it only takes me about 5 minutes once they start to donate my pint. I've lost track of the number of times I've donated, but I think I'm up to about 8.5 gallons. Keep in mind that the average person has 10 pints of blood in their body, so doing the math - I've given enough blood to fill up over 6 people!

I understand that some people, like my Beth, can't give due to medical reasons while other people don't give because they are afraid of needles, especially in the arm. I don't mind that - what REALLY makes me cringe is the finger stick. They can stick me in the arm all they want, but that 1/2 second poke of the razor sharp edge pin just to get a drop of blood almost makes me want to cry. Okay, not really, but it hurts. In fact, it usually gets the band-aid treatment for a couple of days, meanwhile the hole in my arm gets nothing.

The best part of donating, other than helping save lives, is having to sit and eat a snack afterward. My favorite snack of all is the Nutter Butter cookie. In fact, I'd donate once a week if I was able to, just to get the yummy peanut butter sandwich (and to save more lives, of course.) I also tend to take a few extra cookies with me so I can munch for the rest of the day. Yeah, I know, that's probably not right seeing how the American Red Cross is a non-profit organization and all, but hey - I just gave a 10th of my blood supply. 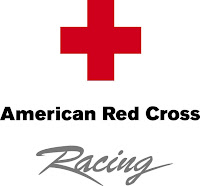 On a final note, the American Red Cross has a new program through their NASCAR® Racing team where you can create teams and earn points toward prizes as your team gives blood (or attempts to give.) If you are interesting in joining Team "Houstons Problem", then head over to Red Cross Racing and join my team. My team code is: EM985HO
Posted by Kevin at 7:56 PM |

Visit msnbc.com for Breaking News, World News, and News about the Economy

Kevin
I'm a techo geek; happily married for 18 yrs to a wonderful woman; father of 2 wonderful girls; addicted to Starbucks, playing on the PS3 and working on the computer.